When I get free, motherfuckers better watch they ass Soon as I get released, I’ma clock some cash Did some time locked down, but I’m back on the street There’ll be trouble when they see me – When I Get Free 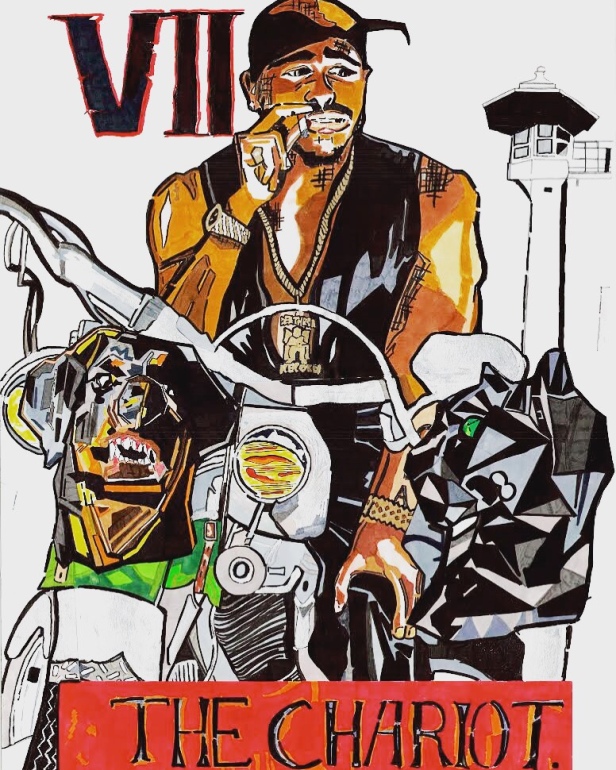 On Friday, October 13th 1995 Tupac Shakur walked out of Clinton Correctional Facility a free man on a bail arrangement that would be valid only as long as the appeal process in his case had legs.

Initially his freedom seemed to me as if it would be fleeting at best as it very much appeared at the time that the New York Courts & Federal Govt. were hell bent on taking it and laying excessive claim to it, no matter how badly it may effect their credibility if properly examined.

Something very exceptional happened soon after that October release however. Tupac “changed” that whole feeling of inevitable injustice simply in the way he carried himself.

Tupac never once conducted himself as if returning to prison had ever crossed his mind as even a distant possibility. Think about anything 2Pac did or created in that window after his release & examine if he ever once validated that possibility.

That fact could and should lend credence to any of the many different theories surrounding September 1996 , but i wont discuss any of those specific scenarios in any detail here.

Instead, i mention this mindset he had as he exited prison to bring attention to the 1 mystery involving 2Pac that should illicit a lot more attention and discussion than it has ever received.

2Pac came out of Jail a “Changed Man” & with everything going on at that time in his life it is easy to chalk it up to trauma, stress, and realizations connected to his own mortality. These are all valid and important as contributing factors, but you must keep analyzing from there to see the overall picture.

Tupac experienced an “event” that carries with it a very special outcome. This event has been assigned different labels that vary wildly due to the wide spectrum of belief systems in place by those who have experienced it. These labels are all valid despite how different they may appear on the surface.

I’ll get further into some of those labels down the road, but to offer 1 maybe lesser known example to work with for the time being, this change can be called “initiation” or to become an “initiate“.

Those aforementioned factors came into play and were exasperated by the heavy feelings involving betrayal. Betrayal is something that will cause someone to have an especially significant experience as it shows us we were wrong about the things we felt most sure and secure in our knowledge about. Betrayal’s effect on the party targeted in the treachery is one of the most significant aspects of the story of Judas and Jesus.

But then you picked a new direction, in the blink of an eye My time away just made perfection, did you think I’d die? I never got a single visit yet I carry on All my old friends too busy now my money gone — WHY U TURN ON ME

After early childhood we are very set in our personal narratives including perceived understanding of why various bad social interactions happen.

Someone perceived as a neutral relationship or even possibly a lesser developed relationship that is casually friendly being a principle party in a treacherous action to yourself can be anticipated at least slightly and explained away. Someone who is highly trusted doing the same thing causes a certain effect on ones mind that opens a window of opportunity for more dramatic rewiring of our personality that is usually unavailable and thus not sought.

An additional place one can look for further information on this process is in the Tarot deck and specifically the Tower card along with its further correspondences within Kabbalah & the “path of wisdom” associated with it.

Another important element of the Perfect Storm contributing to 2Pac’s moment of clarity was the sudden and complete Isolation experienced while in prison. Throughout the majority of 2Pac’s time in prison he was on a schedule of 23 hrs per day of isolation.

Isolation in this type of abundance results in naturally occuring and prolonged existence in a meditative state.

When i mention ‘Initiation‘ or a ‘Moment of Clarity‘ i cannot impress to the reader enough how profound this self actualizing event actually is. It isn’t something that changes your day, week, or even year. It changes everything forever without “wearing off“.

The Christian comparison made to dying and subsequently being born again is especially apt. It has unfortunately been watered down due to the large amount of people who misunderstand and/or misrepresent the process as something that can be simply “wished for” & “proclaimed” into existance by the person wishing it to be.

So , we have a man who was already considered to be very articulate & known to have prior exposure to various important works to do with the furthering along of man’s spiritual underatanding. Many of these instances of higher learning occurring when 2Pac was very young, which only increases the impact.

A verified list of books that 2pac had read.

Then ” The Perfect Storm” came along in the form of severe instances of betrayal from various sources that had previously been a large portion of 2Pac’s trusted inner circle.

Biggie is often mentioned here as he should be, but it goes deeper as well. Stretch from The Live Squad simultaneously conducted himself in a way that 2Pac never anticipated or forgave. This was a longer term relationship that was built on what could be considered a more tested & solid foundation of trust.

Furthermore Tupac mentioned his shock that any black man would actually shoot him or do him potentially irreversible physical harm as did happen at Quad Studios in November 1994. While this maybe can be described as a naive expectation in the end, he believed it as a fundamental truth prior to that moment. This sudden traumatic realization that conflicted with the previous belief system he had in place caused an opportunity for a rapid rewriting of many beliefs he considered fundamental.

“Up until I got shot, I thought that no Black person would ever shoot me. I was their representative. I believed that I didn’t have to fear my own community. I represent them. I was their ambassador to the world” – TUPAC SHAKUR

All of these ingredients led to an epiphany that changed how Tupac Shakur viewed the world as a whole and his place within it. Revenge was the prevailing emotion that spurred him into fullfilling these newfound self realized Ambitionz. This led him to securing his own release by relenting and agreeing to join Death Row Records, an avenue he had made no move on prior despite its standby availability.

As i had mentioned in the beginning of this piece, the most intriguing mystery to me had always been of the epiphany that had been ‘had‘ while incarcerated. I held this fascination in ‘real time‘ as it was all happening in 1996. Tupac was a star before going into prison on Valentine’s Day 1995, but he emerged as a superstar upon release. His newfound focus was startlingly noticable and during this time is when his work ethic attained legendary status. In the time that existed between his Friday the 13th release date & his Friday the 13th demise, he achieved something that preceded the technology making it more comminplace in the way its recognized now. He became Viral.

While most of what ive written here is not neccesarily new terrain to many who also are fascinated by the life & work of Tupac Amaru Shakur, he also left behind messages to be discovered only by the much more discerning eyez/ears & not only in lyrical content. There is a message further encoded in his Death Row work and beyond. Im going to be presenting much of that as best as i can in the articles that follow this one. Much of it for the 1st time ever, not counting my previous more clumsy attempts.

For now ill leave you with one last word on 2pac’s 1995 miracle of thought & in his own words.

Readers of my previous site will know that i do alot with numbers. I felt that this was a noteworthy coincidence in that regard. This passage is referring to a moment in time in 2pacs life in which one apt description might be ‘becoming born again’.

One thought on “SOUL IN PRISON – Exit Tupac : Enter Makaveli”