I recently made an interesting discovery in one of the deleted scenes from the movie Back To The Future 2.

This find lines up with a well known theory to do with the BTTF movie series and how it seems to uncannily foreshadow the events of 9/11/2001.

If unfamiliar with this alleged connection or if it’s just been awhile since you may have looked into this instance of Synchromysticism, it’s a great time to (re) familiarize yourself with the video that first brought it to the forefront of my attention & many others.

My “find” has 3 related parts and what I am most certain of is that anyone who has enough of an interest to have clicked on this article will easily be able to identity the visual value of 1 of these aspects.

The 2nd aspect is something that certain people will notice on their own. However , if that is not the case I can show you some info that might help you to make sense of it.

The 3rd aspect is something that hopefully a couple of you may know & if you do , please DM me at Twitter so we can exchange notes or maybe you can even let me know where it is that the people who do have those types of “eyes to see” might happen to congregate & discuss things.

This screenshot is the first thing that caught my attention , but it’s not necessarily something that everyone is familiar with. This scene is “Old Biff” right after he has “borrowed” the Delorean to deliver the Sports Almanac to his younger self.

When I first saw this I immediately thought of “The Language Of The Birds” also known in some circles as the “Green Language of Freemasonry”.

When this clip started with this above shot, I immediately thought to myself that the movie was just about to display some pertinent symbolism and I wasn’t let down.

Old Biff moves his head into a more hidden place as Doc’s dog has noticed him hiding behind the car.

This is the still image that just about anyone can immediately decipher.

Keep in mind that the movie has just announced via bumper sticker that a message “FOR BIRDS” is forthcoming. The next frame is a futuristic LICENSE PLATE numbered 9 11 right below a very accurate visual representation of the Twin Towers.

Related to this and tying it into an even deeper level of “coincidence” is that this is happening outside of “Future Marty McFlys” home shortly after this has taken place.

The 9/11 reenactment shown at length in the Youtube Video. 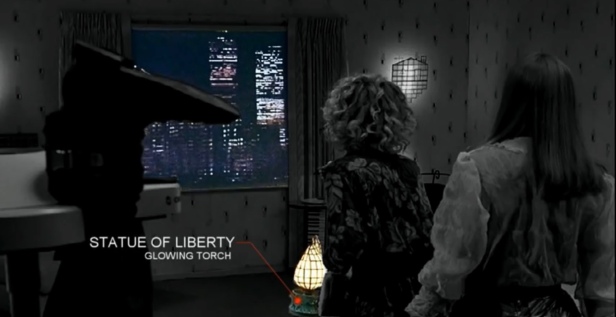 Complete with Statue of Liberty in the same shot.

While that is happening inside the house, Old Biff is outside the house hiding near the license plate also showing the Twin Towers above a stenciled 9 11.

Finally this is the 3rd and final aspect of the license plate scene that I am hoping at least one of you can also decipher via the Language Of The Birds & the “Eyes to See”.

I know what it means & if you do as well , please DM me @zenoftupac on Twitter.

Also here is a good link regarding the Language of The Birds.