“There is geometry in the humming of strings,

There is music in the spacing of spheres.”

Lets compare 3 seemingly coincidental instances where the same string of numbers shows up using the right kind of sight.

From there i’ll leave it up to the reader to discern whether this is something that perhaps has additional meaning or if it’s just a serendipitous grouping of coincidences?

Using the ordered number matching the letters placement give us …

One basic alphanumeric interpretation of the abbreviation U.S.A. would allow it to be viewed in this way.

Let’s set that aside for now to be compared to the other 2 instances where these same numbers show up.

Taking the infamous date, let’s first lay it out without the slashes ( / ) keeping it in US format. Furthermore, we’ll remove the zeroes as they are placeholders & not necessities in seeing the base elements of the symbolic nature of a date.

I will mention here that zeroes aren’t always to be tossed aside as they do have symbolic importance in certain instances. If the symbology comes from a man-made or decided origin than it is well worth examining its importance on a case by case basis

This is what is left in solid numbers from that all important date. Set this aside and we’ll compare at the end with the 1st & 3rd entries.

Contingency plans are in place if Jan 20th is on a Sunday as in this instance the broadcasting of the swearing in ceremony won’t happen until the 21st. This will be a “Made for TV” replay however as the original Oath is still done right on schedule.

Also of peculiar note is that the entire inauguration ceremony is carried forth even if the president elect is of the re-elected variety and should seemingly still be under oath from first time around. 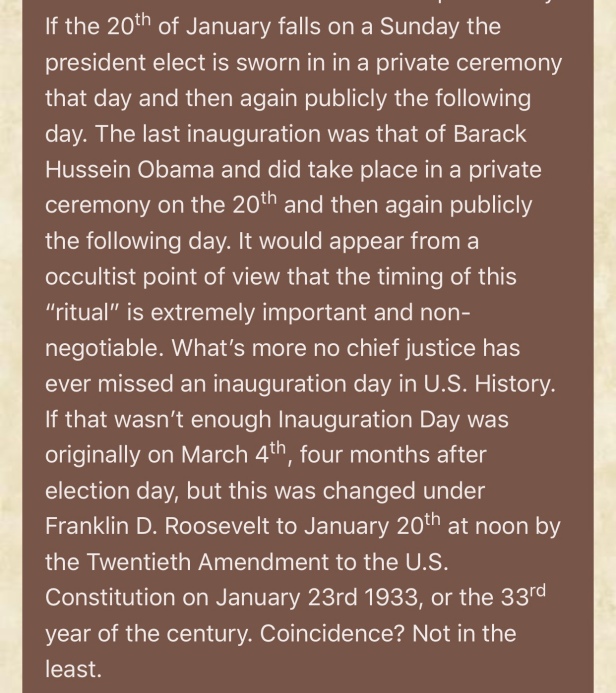 Further info at same website as appears in picture above.

Let’s look at this choice with the right kind of vision.

Your initial reaction may be to see that I’ve potentially made a glaring error due to calling the 20th of January the 19th day.

However, once you consider the actual measure of time passed, you’ll see that the 20th of a month is the 19th day as there are not 20 completed days until the clock strikes midnight on the 20th & the 21st thus begins.

Granting me that logic, let’s pull down the numbers from above.

Finally let’s put them all together and I’ll then let you make your own conclusions as to whether the correspondences are meaningful or simply an aberration?

I will also point out that all 3 of the base subjects were one way or another man made decisions. I mention this because it does reinforce the idea that specific planning very well may be at play here.

Could it be that there is something uniquely advantageous or powerful about that specific set of numbers in a symbolic sense?

When looking at them do keep in mind the Law of Reversal. This one comes to me as I look at the USA and Inauguration number sequences when compared to each other.

I’ll also mention the Law of Three Requests here as well, but it may not directly apply to this set of 3 as there may be more just as relevant instances that I have just not uncovered and been able to add to this group as of yet.

It is worth knowing though as it’s important overall and will come into play when I examine similar subject matter in the next article.

Also here is a link to find an expanded list of important Universal Laws.

Thank You for reading & if this subject matter is interesting to you , come back soon as I’ll have something of a similar vein posted in next short while.

2 thoughts on “Do You Believe in Coincidences? Part 1”