“I no longer believe that William Shakespeare the actor from Stratford was the author of the works that have been ascribed to him.”

It is widely believed that the works of William Shakespeare actually came from someone(s) else & that the pseudonym of Shake-Spear was potentially used to avoid the very fickle wrath of the monarchy & church.

During this time period these 2 were very much intertwined & it was not uncommon for artistic endeavors to be labeled as heresy and subsequently the artist to be punished accordingly.

Many significant historical figures have went on record to state this belief, in addition to the aforementioned Sigmund Freud … a small sampling of other recognizable figures include:

There are well established separate theories about “who” really wrote Shakespeares Dramas & Sonnets. Amongst those who question this authorship, it seems to me that a slight majority believe Francis Bacon was the true author. Others lean towards Christopher Marlowe.

There are also theory’s that involve varying configurations of multiple authors potentially assigning the Shakespeare name to their collective writing effort.

All are well within the realm of possibility in my opinion , but I will mention that I am personally of the opinion that it was primarily Christopher Marlowe who did the work that we now recognize as making up Shakespeare’s catalogue.

I don’t write this to put forth an opinion on who should get credit for the true authorship. The aspect that I’ve been looking into for quite awhile and think I may have “solved” at least a first significant step in, is the Birth & Death date attributed to the character of Shakespeare himself.

Since I first learned of this alternate line of thinking, it has made sense to me that Shakespeares oddly specific Birth & Death dates would likely be part of solving the overall riddle.

It occurred to me that if this figure is in fact at least largely a fictional character, that those dates would be chosen rather than naturally occurring.

If so , there would likely be plenty of purpose involved with those chosen dates.

I’ve looked at this from every which direction over the last 5 years & have come up with a variety of interesting perspectives, but none of them that I felt strongly enough to write about as possibly being something cement.

Recently I wrote a post about the inception of Agenda 21 here … Agenda 21 Inception Date .

The Calendar math in this piece had to do with the same date that Shakespeare was reported to have both born and died on , April 23rd.

This gave me a new view on the Shakespeare riddle.

William Shakespeare was reported to be born on April 23rd 1564

In 2015, I first began seeing advanced concepts to do with “Time“ and it’s measurements. One of the very first highly instinctual aspects had to do with “Negative Space“.

This isn’t noticed often by people who like to break down this kind of information, but I can refer to one incident in which it was picked up on and discussed moderately.

On 9/11/2001 it was correctly identified that September 11th is 111 days before the “end” of the Calendar year. This correspondence has since been pointed to and discussed as another figure of potential deeper meaning.

This “Negative Space” aspect yields a result no matter what date or time of day you look at & from there you can sometimes find another potential meaningful correspondence that isn’t often seen.

Another example of this that I don’t think has been talked about before , but may be of interest to those who are interested in the 9/11 events numerology.

I can’t say for a fact if this is imminently pertinent to that whole situation, but anyone who keeps the 111 days before end of year fact for further consideration of their research … they’d likely be intrigued by that as well. These things are just well hidden in plain sight until you go looking for them.

Returning to Shakespeare & his Dates of birth & Death. I realized in the Agenda 21 post that April 23 is in fact 8 months and 8 days before the end of any Calendar year.

This applies directly to both of the Shakespeare dates as well. 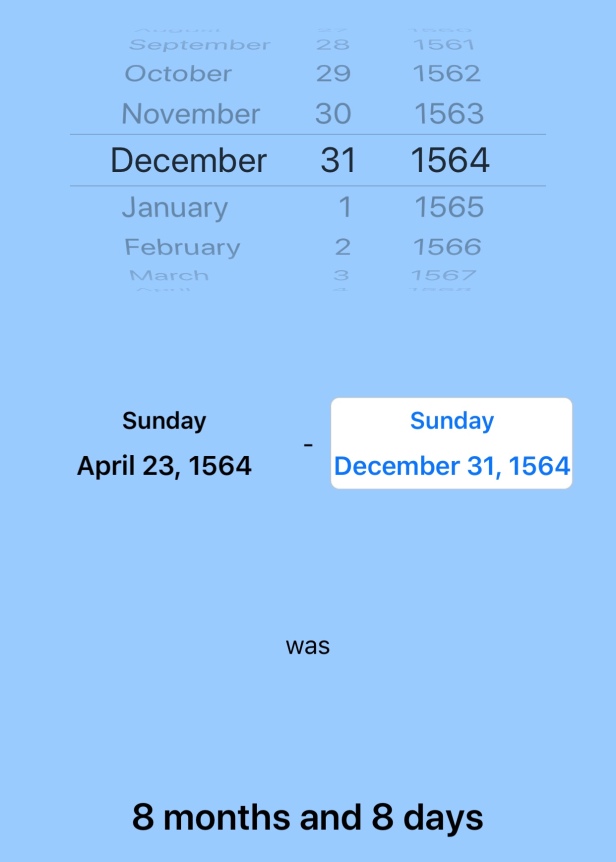 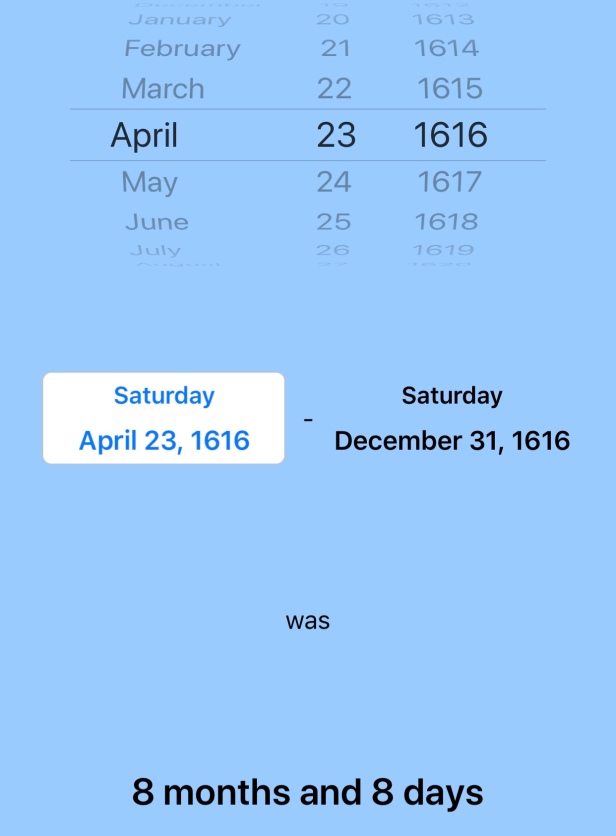 So it’s verifiable that Shakespeare was both Born & Died 8 months & 8 days prior to the end of those respective years.

Separate from those dates that are confined within those years calendars & looking at the overall YEAR of each occasion. The first thing that caught my eye a while back was that both years were in fact Leap Years.

In addition to this it also caught my attention the factorization involved with these years.

His birth was in the 64th year of the 16th century.

His death was in the 16th year of the 17th century.

Both his entire birth and death dates are intimately involved with the number 8 all the way through each one & while it’s not completely on the surface, it is instead just beneath the surface and requires a slight change in perspective.

All together Eight occurrences of the number 8 without any deviation or break in pattern.

The True Authorship questions become more interesting & more doubt is cast when you look further into some of the available information to do with the remnants of the physical man Shakespeare ( or lack thereof ).

One lesser known fact is that Shakespeare is both buried 17 feet deep & also has a curse inscribed on his headstone that is directed at anyone who would think of disturbing his gravesite. These 2 measures could be seen as deterrents to any kind of potential long term verification. 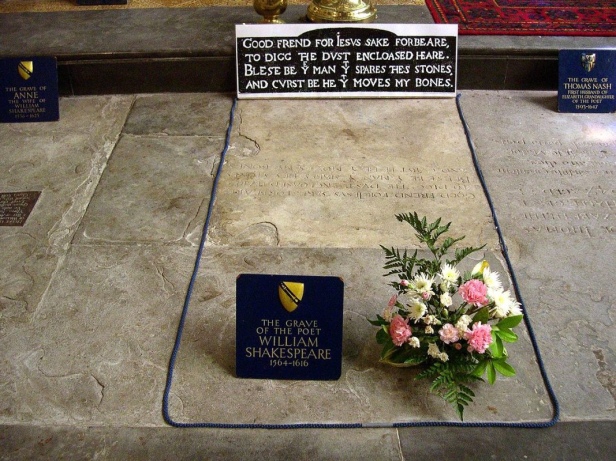 I mention this to highlight the possibility that Shakespeare perhaps never existed at all & thus his birth & death dates would be something that would need to be manufactured just by circumstance.

There are plenty of other great arguments online to do with why Shakespeare may have been fictionalized , but I don’t think I’d be able to argue them as well as people from the literary world.

I do think the gravesite oddities may be sufficient in maybe sparking a few of your interests in looking deeper into it.

Bringing it back to the Eight instances of the number 8 encoded within the 2 most important dates of Shakespeares identify. If he is a fictional character then there would certainly be implied symbolic importance to this choice.

For one thing 8 is considered the “Number of the perfection, the infinity. In mathematics the symbol of the infinity is represented by a 8 laid down”.

There are many other important avenues of symbolism to do with 8 that would require multiple posts to do justice. I will leave a few links to do with 8, 88, & 888 right below. This site is the best one I’ve found online to study this kind of information.

I hope that if I’ve stumbled onto something here that is an actual solid clue left behind, that it may potentially point people in the right directions for more skillful literary breakdowns of Shakespeares work.

Shakespeares Sonnets come to mind for me in this way as they are numbered and there is a fair amount of mystery and debate behind many aspects of these works.

One additional note about the Sonnets is that there are 154 Sonnets in Shakespeares collection.

The 154th Prime Number is 887 or as close as you can possibly get to the Number 888 in the way of prime numbers. 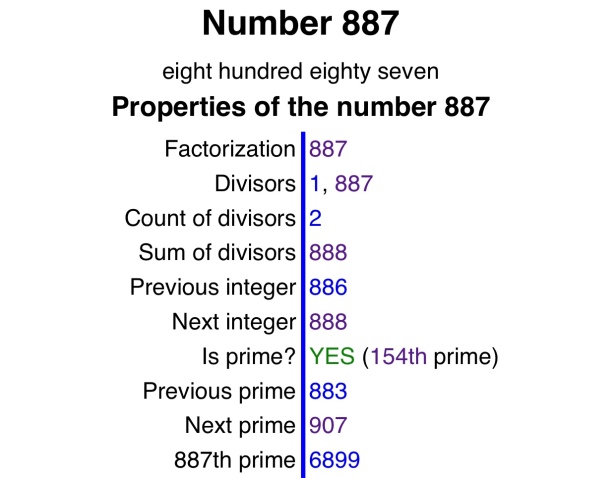 Thank you for reading this post , I am still actively looking into more oddities to do with Shakespeare and the number 8 , I will update when/if I find something sufficient to add.

God may not play dice with the universe, but something strange is going on with the prime numbers.

10 thoughts on “The Shakespeare Code”